The decision to serve was clear 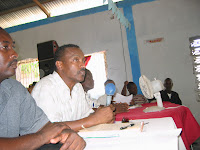 The political meetings became more frequent.  People from all over the ten departments wanted to see me and discuss their personal or group political experiences and their disappointments.  They saw in me someone who could represent them as I was become surer of this responsibility to serve my country in a different capacity that I initially anticipated.  If anything, I was ready to provoke the system in a revolution of ideas and attitude for change.

In the mean time, the need for health care in my view became more apparent as I traveled the country.  I engaged several medical teams in different areas in a very timid way as I did not want to mix my political and social activities and for that reason, I never used the media for political exposure.  Something I was later made aware that I should have done.  I found great pleasures to be able to play that small humanitarian role in the country and more importantly to be seen as someone politically who could possibly contribute for a real change.

It was clear that I was engaged in this new role while I was being slowly shaped into it to fit in the best I could.
Posted by Dr.Eddy Delaleu D.D./OHFCOH | Operation Hope for Children of Haiti, Inc. at 10:44 PM